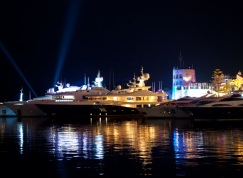 The Councillor for Tourism, José Luis Hernández, and the mayoress, Angeles Munoz, talked about the results of the fourth edition of 'Marbella Luxury Weekend' in Puerto Banus, Marbella.

The mayor noted that the event feedback was very positive and very satisfying. A total of 75 companies, as well as sponsors or service providers performed more than 93 events during the four days of MLW and there was over 200 accredited media in the port.

During the weekend there was 55.000 visitors in Puerto Banus, surpassing the figure of last year by 5.000. The average hotel occupancy during the weekend has been 82%, confirming the predictions that were made from the municipal delegation of Tourism.

Hernandez wanted to highlight the novelty of this year's 'Marbella Luxury Weekend’ that was the floating catwalk, which "has had a huge impact on the media, with the assistance of Spanish internationally renowned designers such as Custo Barcelona or Andres Sarda, and we want this to become a reference of the city in the future. "

"We must also underline the event coverage by national television channels like TVE, Telecinco and Canal Sur, as well as international brands such as Channel Art of France or the Russian Music Box, and other major publications and national radio" he stated.

Another notable event was the Zagaleta Forum. "We can not forget the people who came here for this forum from large international companies, and who then also become ambassadors of Marbella,” concluded Hernandez.