Have You Heard What the People Are Saying? 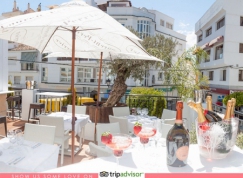 Below, you can see the comments left by other customers!

"Had a great evening in this very trendy Bar / Restaurant. Food was of a good standard starters were quick and tasty. A few of us had Lobster and a Fillet which despite not being served on a plate was really good. The drinks and cocktails are amazing and fit in well with the decor and atmosphere in the place."

"Great atmosphere, whether eating inside or out. Great cocktails, varied menu, and friendly staff. Great for casual lunch or intimate dinner."

"We visited this bar/restaurant twice over the weekend, on both occasions just for drinks. It's set just far enough away from the port but close enough to walk. The staff are very attentive and friendly. Highly recommend the La Sala Premium white wine."

"My friend and I had lunch here yesterday, was lovely the staff were very friendly and I couldn't fault it for what it was. Great music and nice location, we had a choice of where we sat which is important to me. Totally recommend this place to others for a lunch time do."

"I've been lucky enough to eat at La Sala on several occasions over the last few years. The team have mastered the art of delivering a high class evening experience albeit with a friendly, casual feel making everyone feel comfortable and relaxed. Great food, good live music and a fantastic atmosphere. Highly recommended."