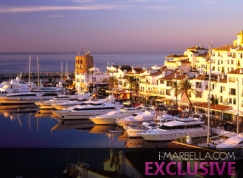 Puerto Banus is the most famous touristic marina in southern Europe. Saying BANÚS is saying it all about luxury, sport, glamour, culture, commerce, beautiful people, technology, services and incessant activity.

Puerto Banus was created by a visionary, the developer Jose Banus Masdeu, who created a new way of tourism, social, and financial development in Marbella, Costa del Sol and Andalusia. Banús knew how to choose its location in a coastal point setting with a micro climate which makes it unique and known worldwide. The spirit of José Banús has been maintained and boosted by his nephew and current president of Puerto Banús, Alberto Vidiella Tudores, who has managed to consolidate this place as a key destination for the nautical tourism, as well as prime location for major firms and luxury water sports.

Since its opening, The Port has been also a meeting place for persons of all kinds: Royal Houses from different places in the world, politicals, artists, entrepreneurs, athletes ...

Warmed by the Mediterranean and the spectacular Andalusian climate, The largest and most famous yachts as Navila, Neeve, Sea Cloud, Blue Crystal, Bravo, Shaft, America, Al Miriyah or Shahnaz, have chosen, one of the best ports worldwide, which won the Gold Medal For the National Tourism Merit among other distinguished awards.

Since its inauguration in May 1970, and later in the nineties with the opening of the Club de Mar, PUERTO BANÚS has been a generator of sports and cultural events, in addition to numerous events organized by the greatest names in fashion and design who have their headquarters in Banús, as its extension is considered the highest concentration of luxury brands in Europe.