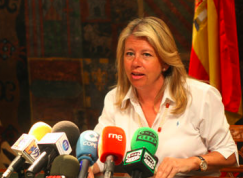 
The Mayor of Marbella thinks money defrauded from the town in the Malaya case should be returned home.

The Partido Popular Mayor of Marbella, Ángeles Muñoz, announced on Friday that she would do all she could to ensure that the money defrauded out of the municipality in the Malaya case is returned to the municipal coffers. She said it came as a ‘hard blow’ to hear that the Anti-corruption Prosector considered that the amount defrauded from the Town Hall was only 4.1 million €. She considers the sum was far greater than that.

The Prosecutor is calling for fines totaling 1.126 billion against the accused in the case, and Muñoz considers that money should be used to compensate the town. She said it would be ‘absolutely unjust and intolerable’ if the money from the fines goes to the State.  ‘The Malaya case cannot become a grand business for the Government’, she said.