Villa Padierna, Best Hotel in Spain in 2013 by The International Hotel Awards 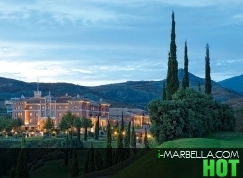 Marbella, October 9th 2013: The Villa Padierna Palace Hotel 5 * GL Marbella Golf Resort Spa, awarded a sixth star by Seven Stars and Stripes in 2012, triumphs again. The panel of the prestigious International Hotel Awards has named the Villa Padierna Palace as the Best Hotel in Spain. The award, which is sponsored by the multinational company Virgin Atlantic, will be delivered on November 3rd in London.

During the ceremony, they will also reveal if the hotel has been awarded the higher level in the same category, meaning, the hotel could be named Best Hotel in Europe – the only Spanish hotel with this commendation-. With this, Villa Padierna Palace would become a European candidate for Best Hotel in the World, an award which will also be given at this ceremony.

The International Hotel Awards aim to identify, assess and reward excellence in the hospitality industry worldwide. They use a series of rankings and 17 different categories divided into regions: Asia Pacific, Arabia & Africa, the Americas, the Caribbean, Europe and the UK. The participants are then judged by a team of highly qualified professionals at every level of discipline valued.

These awards are open to hotels, hotel promoters and developers, interior designers, architects, PR companies, advertising agencies and web designers. This distinction is the finishing touch to a fantastic season at the Villa Padierna Palace Hotel. Notable awards and accolades by tourists and professionals have fallen on this great complex which, with its philosophy, its location and its architectural structure, remains the most valued of its kind.

These awards are given to the highest ranked in each category on a national level depending on the scores given by the industries professionals –travel agents, restaurateurs, hoteliers, airline executives etc.- over a period of three months while the voting is open.

A well as these prizes, another prestigious online travel agency, Expedia.com, included five Spanish hotels in its list of the 650 best hotels in the world, amongst them was the Villa Padierna Palace Hotel.