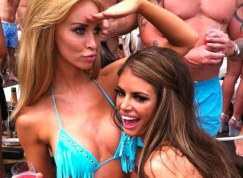 
Love them or hate them they aren’t going anywhere, the cast of TOWIE have proved to be the best bit of Marbella marketing ever, as figures show a 72 per cent increase in interest since they started holidaying there.

The cast of TOWIE are becoming a familiar sight in “Marbs”, and it would appear if it’s good enough for them, then it is certainly good enough for their fans. The first episode of two, ‘The Only Way Is Marbella’ specials was aired on Sunday June 22 and Hotels.com reported a surge in interest after the programme first aired.

Viewers were entertained with the usual antics expected from the cast, visiting the restaurants, bars and beaches all the while swapping, gossip and partners against the back drop of Marbella sunshine.

Hotels.com brand spokesman Alison Couper said: 'It's impressive to see how influential our favourite TV shows can be on our travel habits. Our site offers great deals for Marbella for those who are interested in whisking themselves away to have a "reem" holiday this summer!'

Adding to the Marbella excitement, Lauren Pope has listed her favourite Marbella hotspots to MailOnline Travel, while promoting TOWIE’s first music CD, The Only Way is Marbs: Marbella Anthems. The launch party is on Friday, not in Marbella as you might expect, but at The Brickyard, in Essex.

Marbella benefits from the TOWIE effect