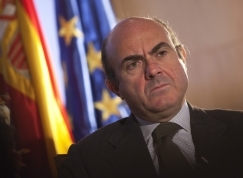 Minister for the Economy, Luis de Guindos, has been giving details of the Government's thoughts on the radio.

The Minister for the Economy and Competitiveness, Luis de Guindos, has said that reform of the public health system ‘is essential’ to guarantee its ‘sustainability’. He has said that unproductive costs have to be eliminated and basic services given priority.

Ruling out the co-payment system when you would pay a prescription charge, he has said more progressive moves are needed and has proposed that top earners pay for health. He said the Government would be considering if all health provisions should be maintained to people who earn over 100,000 €.

Luis de Guindos attributes the pressure on the markets currently and the high Risk Premium to the doubts over Spain’s regional administrations. But he ruled out running health from Madrid, saying there were no plans for taking either health or education services away from the regions.

Speaking on the Cadena Ser radio station today he said ‘The future of the health system in Spain is at stake’.