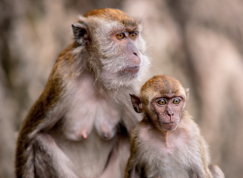 
Algeciras has emerged as the animal trafficking gateway to Europe from Africa as Spain’s illegal animal trade booms.

Exotic animals – predominantly monkeys – are increasingly being smuggled across the Strait of Gibraltar into the busy southern port as criminal organisations turn to trafficking animals rather than drugs or women. Although the majority of smugglers use ferries to transport their goods, one airline passenger was recently arrested after a routine luggage search found a small monkey bound and gagged inside her handbag.

A spokesperson from primate rescue centre Primadomus Spain said that ‘mafia type gangs’ were largely to blame for the increased trafficking but also said European tourists needed to understand the dangers of smuggling animals.

“Tourists see an animal in the markets, especially in Morocco, and feel pity for it, they want to save it,” she said. “Primates are not like dogs and cats. They have the intelligence of a four- or five-year-old human child but they are five to eight times stronger than an adult human. They can break a bone with a bite. They cannot cope in a domesticated environment, as they get older they start to show their natural instincts to be strong and dominant to establish themselves in the group hierarchy, and they attack their human group. The owner doesn’t know how to handle them, so they lock them into a small cage and leave them.”

Many smuggled animals are picked up by authorities in Spain who then home them at Primadomus Spain’s primate rescue centre situated in a small green valley sheltered by low mountains. The unassuming 450-acre complex was built six years ago near Villena and homes more than 60 primates rescued from abuse and neglect. The centre has become a key player in the fight to halt illegal animal trading through the Iberian Peninsula.

Wild Marbella with Dr Venom:Spiders of the Golden Mile (4)