Numbers Up in Marbella 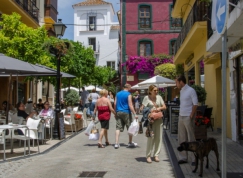 
It was a happy Christmas for Marbella's luxury hotels as occupancy of up to 90 per cent capped a year of recovery for the tourism sector.

Over the holiday period, the city's four star hotels were nearly full with some having to put up the no vacancy signs.

Councillor for tourism, Jose Luis Hernandez, welcomed the figures and said that 2014 had closed as a very positive year for tourism.

The number of visitors from abroad was up 5.15 per cent and hotel stays were up 7 per cent.

Overall, the biggest rises in tourism numbers were from Spanish tourists. By proportion, the highest increases from foreign visitors were from the UK (up 8 per cent), Germany (9 per cent), and Arabian countries (17 per cent).

Hernandez added that for 2015, the town hall was targeting North America in a bid to bring more high spending visitors to the town.