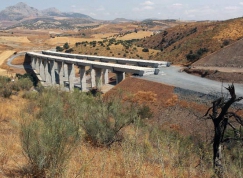 Two new speed controls that were installed in February in the Las Pedrizas area have already caught 500 drivers speeding per day this summer.

Drivers this month will be sent a nice ‘present’ by the Traffic police (Dirección General de Tráfico) in the form of a hefty fine, as thousands of drivers have been captured by the new radar systems, which are located at the entrance to Malaga. Since July, when the two controls were put into action, the cameras have been clicking over 15,000 times per month, as they photograph vehicles travelling over the legal speed of 80km (50mph) per hour.

The radars measure the speed of a vehicle twice, first at the front of the vehicle and the second at the rear, therefore giving an average readout. If the vehicle is travelling over 80km per hour, the machine automatically takes a photo of both the number plates.

According to Trinidad Hernández, the local director of the Malaga department of the traffic police (DGT), the month of August looked to be the same, although figures are not out yet, but she said “we have to take into account that there are a number of these vehicles that are authorised to drive over the limit, like ambulances, the fire brigade and vehicles belonging to the Guardia Civil.”

The director said that “not all the vehicles end up with fines.”  If the vehicle is registered to a country that is not part of the European Union, there is no identifying system and similarly, vehicles that are caught excessively speeding, go through a different criminal process. Fifty thousand speeding fines have been handed out in the Malaga area.

Social cost of accidents high on A-7 Malaga motorway