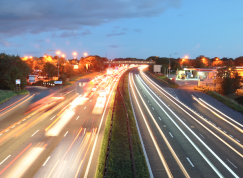 
The stretch of the A-7 that runs from the centre of Marbella to the motorway tunnel will be re-lit before the end of the summer.

The lights are to come back to the two stretches of the A-7 dual carriageway (one at the Marbella turn-off and the other where the A-7 converges with the AP-7 motorway) that have been in the dark for the last three years.

Marbella town hall is to cover the costs once more. The first phase, to re-light the stretch at the Marbella turn-off is planned to be completed by the end of the summer while the second phase, to light up the part of the road between the motorway tunnel at Nagüeles and Puerto Banús is expected to be carried out by the end of the year.

“What we cannot cover is the cost of the lighting inside the tunnel which, as was agreed, should be paid by the company which holds the concession for running the toll motorway,” explained the councillor responsible for works, Javier García.

After almost three years in darkness, these two stretches of road, some six kilometres in total, will have their street lights turned back on - to the satisfaction of the thousands of drivers who take this route every day. According to the council, the measure is a response to the need for safety on the A-7, which has one of the biggest volumes of traffic in Malaga province - especially near Marbella and especially during the summer.

The lights were turned off at the end of 2011 in a joint act of rebellion by the councils of Marbella, Estepona, Mijas, Fuengirola and Manilva against the then Socialist government. The councils, all PP-run (apart from Manilva), refused to pay the electricity bill, stating that central government should instead be responsible.

Once the PP took charge of the Government the protests ceased and, little by little, these councils began to restore light to stretches of the former N-340, now known as the A-7, in and around each of their towns.

Marbella town hall claims that this latest move will not increase the municipal electricity bill due to the savings made over the last few years and ongoing measures. It is to invest the 400,000 euros of European Union funds given last year in a specialised audit to detect areas of excessive energy consumption in order to take the appropriate steps.

A-7 lights go off west of Málaga