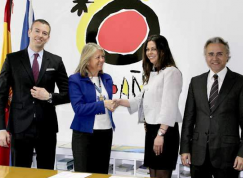 There will also be articles about Marbella in the magazines given to passengers. Muñoz said the project was a positive one as it is aimed at the British market, which accounts for between 35 and 38 per cent of the tourists who visit Marbella.

She said that although Marbella was interested in continuing to attract upcoming markets, it could not let faithful visitors be forgotten. She also met with the head of the ‘Turespaña’ Office in the UK, Enrique Ruiz, who was pleased that the total number of seats available on flights to Malaga this summer will be 1.9 million.

According to the local Tourism Delegation, the average British visitors to Marbella has a medium-high spending power, spending an average of €214 per day and staying between nine and 15 days for leisure and relaxation.

They normally book only their hotel, often have a hire car, and book more than a month in advance, arriving by plane. This means that the visitors, with an average age of between 30 and 39, come to Marbella and use facilities around the city and throughout the province. Most are people in business who come with their partners and families and are attracted by the climate, beaches and people. They leave content with the hotel, restaurants, services and environment.