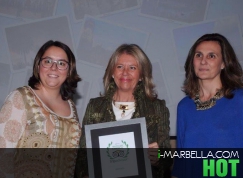 Marbella was chosen as the seventh best domestic destination in TripAdvisor awards Travellers'Choice.

Marbella was awarded as the 7th best Spanish destination by 261 million TripAdvisor users worldwide. The town hall receieved recognition for this success of making Marbella a beautiful tourist destination.

The mayor, Angeles Muñoz , along with the Councillor for Tourism, José Luis Hernández , attended the prize giving by TripAdvisor Travellers'Choice awards in Madrid this week and recieved the honor for Marbella as the seventh best national destination.

The councilor said that "This is an important recognition for excellence, quality and supply of infrastructure and services related to gastronomy, leisure and shopping in our city."

Muñoz stressed that "this is the first time the municipality enters the ranking of the ten best rated destinations in Spain" and stressed that TripAdvisor "is the Internet portal in which a huge number of tourists can access and make reviews, since Tripadvisor has more than 260 million monthly users and about 50 million annual reviews."