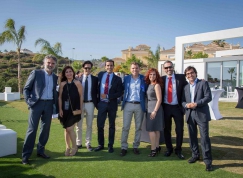 The developers – that have financial support from one of America's major investment fund – presented this project alongside the mayor of Marbella. The project will receive 150 million of investment during the next 4 years and will create approximately 400 jobs in the city.

The ICON project, already under construction and currently considered one of the most ambitious projects in the city, is now in its initial phase of development and has already sold 70% of it. Its positive reception in the area was significantly increased by the presentation of its spectacular showroom in an elegant party on May 28, which united a large number of professionals from the luxury real estate sector on the Costa del Sol.

At the press conference on July 15, 2015, they following aspects were highlighted: the importance of the project in terms of the economy (150 million of investment); employment level (the project is generating approximately 400 direct jobs and will help maintain hundreds of other jobs indirectly); but above all, in terms of the area's image, since, as its founders Thomas and Mark Farber Gasset said, "(...) our goal is to continue the success that Santa Clara has gained in recent years, bringing a new concept of services and communal areas that make this exclusive urbanization the best and most modern resorts to live in in Marbella."