Hernández: Number of tourists increased by 11% in October compared to 2012 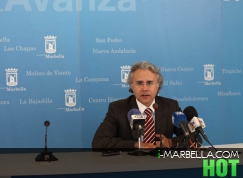 The Councillor of Tourism, José Luis Hernández, made a very positive assessment on the 28th of November, saying that the data for October provided by the National Statistics Institute (INE) reflects an increase of 11% in the number of tourists in the city compared to 2012.

Hernandez stressed that this figure " breaks a downward trend that was occurring in recent years and extends the tourist season in the city." He also said that ”this is particularly relevant in a context of crisis and this endorses the promotion policy”. He stated that the number of overnight stays has also increased by 9% and has drawn attention to the fact that 78 % of all tourists staying in hotels were foreigners while in the case of overnight stays, reaches 88 %.

For the mayor, this data "demonstrates how domestic tourism has been affected by the crisis and to reinforce the strategy of the City to pay special attention to the international market." Hernandez has also reviewed data relating to tourist apartments in September, reflecting an 25% increase in Marbella, whiles there was a 11% drop in Spain and 3% in Andalusia.