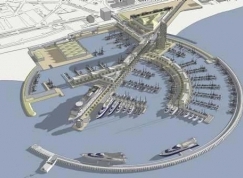 The plan for the new port in Marbella


Permission for the port extension has been granted by Government, but there are doubts over the plan to build a luxury hotel.

The Government has approved the port at La Bajadilla in Marbella, with the Ministry conceding a favourable report on the environmental impact of the port extension.

However the Ministry also says that the plans for a 5 star hotel, which is considered to be key to the financing of the project, will be processed in another way. So it’s currently not clear if the hotel will be granted planning permission. The plans for the hotel are for it to cover 20,000 m2 and contain 200 rooms.

The project for the port has another problem. It is being promoted by Sheik Abdullah Ben Nasser Al-Thani, who has recently announced his intention to Málaga Football Club, and some wonder if his commitment to the Costa del Sol is reduced.