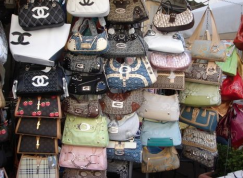 More than a million items of fake designer clothes and shoes have been seized in several cities, including Madrid, Barcelona, Sevilla and Malaga.

In a statement, the interior ministry said the counterfeit items were made in illegal factories in Portugal and then shipped to distributors in north-western Spain. A total of 235 tonnes of fake garments and footwear were distributed over the past two years at a profit of €5.5 million, the statement said.

According to the ministry, part of the money was held at two mosques in the cities of Ourense and Xinzo de Limia. Around 100 people are said to have been arrested, including the imam of the mosque of Xinzo de Limia.

Officials said the mosque received nearly €100,000 euros. The imam at the mosque in the nearby city of Ourense was also detained. Police suspect him of helping to launder the money.

How to spot a fake designer handbag?