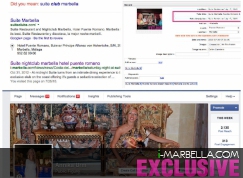 Facebook is changing in nunpredictable ways, and your investment in your Facebook page can be a real waste of money!

Facebook already exerts a great deal of control over what users see, as it constantly tweaks and tinkers with its News Feed algorithm.

Facebook is also an opportunity to control political and interest group, although according to recent studies, almost half of all web-using adults -- and 88 percent of Millennials -- use Facebook to find news.

This is too harsh on smaller companies that cannot allow to pay for each and every post.

2. Facebook doesn't add SEO meta titles or descriptions used by Google and IT specialists. On the contrary, i-Marbella.com adds a meta title and description to every single piece of news.

3. A lot of companies have only a Facebook page, but they doesn't own it, and Facebook, for instance, can delete it, etc., any time they like. Do NOT invest into something that is not yours.

4. Facebook blamed users for the controversial News Feed change, declaring that its data team had crunched the numbers and found that users liked it better when they saw fewer posts from news sites. Of course, by crunching the numbers, Facebook merely meant that it ran a survey, and the questions it asked of users were magnificently leading. Questions like Are you worried about missing important updates from the friends you care about? seemed to be carefully designed to goad users into saying they preferred an outcome that just so happened to be perfectly aligned with Facebook's business interests.

So, of course, everyone's going to answer yes to that. But does that mean users don't care about other types of posts? It doesn't matter. This is what Facebook does just. Whenever it receives criticism or wishes to carry out something potentially controversial, it saves face by taking messy or incomplete or subjective data and twisting it so that users shoulder the blame.

5. Facebook has altered the math of the game so that only posts that get a disproportionate amount of engagement (likes, clicks, comments, shares) will be seen by a lot of people – regardless of whether those people are fans or friends. This opens up more real estate for Promoted Posts (ads) from companies or people. That's right, Facebook also (somewhat quietly) announced that they are opening up the option for individuals to buy exposure on a per-post basis. So, if you want even more people to see your cat doing that funny thing, you can spend $7 to make it so.

Will companies start to recruit fans to promote posts on their personal pages, reimbursing them the $7 per post in the form of coupons and special offers? Stupid question. Of course they will. We'll probably try it for our clients, too. This isn't science. It's PR.

7. i-Marbella.com uses special meta titles and tags in every artcle, gallery, upcoming event, guide, and directory to ensure a better position on Google for your article.