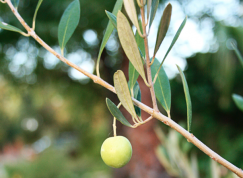 
Bad news from Andalucia, the region´s prolonged drought is expected to see 2014´s olive yield drop and prices for the liquid gold that is olive oil, rise.

Whilst those with a taste for the finest salad dressing look to Italy to make up the slack, news from Puglia, Italy´s main olive growing area is that their crop has been hit with a blight.

Spain produces more than 50 per cent of the world's olive oil, with 73 per cent coming from Andalucía. In 2013 olive oil exports from the region were worth €1.5 billion. A report last year determined that the top 10 olive oils in the world were all Spanish.

The weather gods could yet save the day and pour down some much needed rain. Harvesting takes place from October to January depending on variety, location and finding employees willing to spend the working day whacking trees with a long stick. Without wetter weather, the crop this year is predicted to be down 40 per cent on the bumper 1.77 million-tonne harvest of 2013-14.

David Erice of Spain's Small Farmers Union, told The Guardian newspaper: "Not even the most optimistic are predicting a million tonnes. We're expecting something closer to 2012, when production was around 700,000 tonnes."

It is anticipated that prices will rise by as much as €0.50 cents per litre, although Spanish supermarkets use Olive Oil as a loss leader in their price wars, much to the annoyance of producers who complain that the supermarkets have pushed the price below the cost of production.

Virgin olive oil suppliers have added further fire to the fuel by claiming that speculators are contributing to the potential future price rise by gambling on the uncertainty caused by the drought and pushing prices higher. That claim is countered by critics who suggest that some producers are holding back stock in anticipation of selling at a higher price later on in the year.

Interestingly Russia has left Olive oil off its recent list of agricultural products embargoed in the ongoing fight with the EU and US over the conflict in Ukraine as reported in Euro Weekly News.

Pamper your Hair with Olive Oil (3)