5 Credit Cards Most Of The World Could Never Own 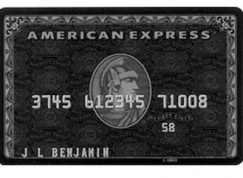 
We find symbols of wealth in everything we possess, such as the watches we wear, the cars we drive and the homes we live in. So, it’s no surprise that the credit cards in our wallets also allude to our ability to spend.

At the bottom, you’ll find secured credit cards, which cater to people with bad credit profiles for one reason or another. At the top, you’ll discover elusive credit cards that are only available to a small group of consumers, those who don’t hesitate to spend hundreds of thousands of dollars at a moment’s notice.

The credit card industry has discovered a market where the super-affluent takes pride in owning one of these elite credit cards. Unlike your typical credit card, these prestigious credit cards are not heavily advertised. Usually for the price of a high annual fee, cardmembers get extraordinary perks, ridiculously high credit limits and special treatment wherever they shop.

The Merrill Accolades American Express Card, formerly the Bank of America Accolades American Express card, is available only to select clients of the Merrill Lynch Wealth Management division, a part of Bank of America. The Merrill Accolades card boasts a black design, with the customary Merrill Lynch bull logo. However, the card comes with a relatively low annual fee of just $295, cheaper than many high-tier airline credit cards.

The Citigroup Chairman American Express Card is another distinguished credit card known to be available only to a small group of clients of Citi’s private bank and investment units.

The card touts a black design to match its prestige, but it isn’t made of any special materials like some other elite credit cards out there. It has an annual fee of $500 with no preset spending limit.

The Stratus Rewards Visa card is a highly exclusive credit card that is often dubbed the “White Card,” in contrast to the American Express “Black Card.” The card is available only by invitation through a current cardmember or Stratus Rewards partner company. The target audience for this card are high-net-worth consumers who must have private jet travel.

The Stratus Rewards Visa card has an annual fee of $1,500. The card’s loyalty program revolves around private jet travel as a redeemable reward. Cardmembers can pool their earned points with friends and other members to redeem for flight hours on private jets, available through MarquisJet.

The JPMorgan Palladium card is an exclusive offering for the wealthiest of JPMorgan Chase clients. It’s available only to customers with private bankers, who are assigned to them when they become clients of JPMorgan’s high-networth banking units. Chase Private Client, for instance, requires customers to have $250,000 or more in investable assets.

The Palladium card has an annual fee of $595 and all other typical credit card transaction fees are waived. There is no preset spending limit. The card is made a palladium, a rare metal that belongs in the family of platinum metals, and 23-karat gold with logos, names and dates etched in by laser. Since the card alone is of such value, cardmembers also receive a plastic version of the Palladium card.

American Express Centurion card, also dubbed “The Black Card,” is the most well-known exclusive credit card out there. With a $5,000 one-time initiation fee and $2,500 annual fee, you’ll need deep pockets for the privilege of having this card. Cardmembers have no preset spending limit. The card itself is made of titanium that is noticeably different from the plastic used in most credit cards. Flash a Centurion card at the counter and watch the store cashier’s eyes light up.

Cardmembers must be invited to apply for the Centurion card and you’ll need to show that you have a six-figure annual spending rate ($250,000). Centurion cardmembers have been invited to get the card because they spent enough on their American Express Platinum Cards, which carry a lower annual fee of $450.

Recognized all around the world, the card’s features include a dedicated concierge, complimentary companion airline tickets, access to airport lounges, flight upgrades, complimentary hotel nights, personal shoppers at luxury retailers and much more. Centurion cardmembers have been known to shut down entire stores just so they can shop alone.