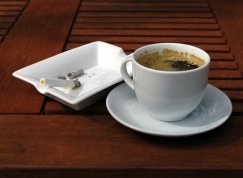 
The owner of the establishment says he will not pay the fine.

The owner of the restaurant in San Pedro de Alcántara, Marbella, who has conspicuously been ignoring the ban on smoking in closed public areas from January 2, is being served a 145,000 € fine. The fine comes from the Delegación de Salud and El Mundo newspaper reports that José Eugenio Arias of the Asador de Guadalmina restaurant will be informed about it in a few hours time. He will then have 15 days to present any arguments he may have in his defence.

The fine also considers the possibility of the closure of the restaurant given its failing to meet specific requirements placed by the health authority. The owner erected signs saying that the new no-smoking law would not be enforced in his establishment.

José Eugenio Arias has however indicated to Europa Press that he will not pay the fine. He said he is currently waiting for an answer to the arguments he presented last month against the proceedings started against him by the regional government’s health department in Málaga.

The owner of the Asador de Guadalmina was in Madrid on Tuesday, making contacts and setting up meetings in what Europa Press describes as his ‘personal crusade’ against the anti-smoking legislation. He’s now set up a platform called, ‘Reforma o Ruina’ – reform of the law, or the ruin of the hostelry sector.

Other businesses in the Guadalmina area say his attitude in ignoring the ban is losing them money, and they may consider setting up their own platform in opposition.

Taste of the Orient at The Orchid Room… (2)