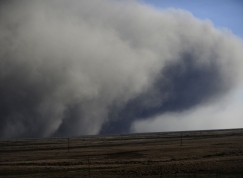 
Here is the latest update on Malaga Airport. And it seems that the local conditions become complicated in several areas, including the province of Malaga. Flights have also been cancelled in Manchester, Helsinki and Barcelona to name a few.

Malaga Airport has cancelled ten flights during this morning, five of them leaving the city and five with destination to the capital of the Costa del Sol. At the time being, AENA (Spanish Airports and Air Navigation) could not specify the countries with which these flights are connected, although they informed that it is likely that the number of affected flights will increase throughout the day.

Yet the situation was more complicated in Canary Islands, were airports were closed for several hours, and in Seville and Jerez airports, which are still not operating.

The evolution of the volcanic ash cloud over the Spanish airspace this morning forced to close AENA airports in Tenerife North, Tenerife South. La Palma and La Gomera from four in the morning (Spanish CET) and those of Jerez, Seville and Badajoz from six in the morning, as reported by Spanish Airports and Air Navigation (AENA).

Air traffic restrictions will be maintained, which are effective from yesterday afternoon, imposed between 20,000 and 35,000 feet, representing a reduction of 25% of operations in Seville, Madrid and Barcelona.

The ashes are expected to map out a curve on southern Europe to Greece and Turkey, what could cause more closures of airports, according to Eurocontrol. In Spain, the major problems are foreseen for Wednesday, when the ash will cover much of the peninsula.

Until yesterday evening had been canceled 305 of the 5.336 planned operations, according to Aena. Iberia airline canceled 40 flights and chartered buses to transport passengers to their destinations.