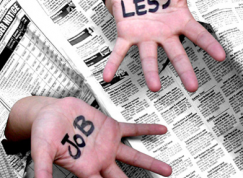 
Unemployment figures dropped in June for the third month running, boosting the government's claim that there is light at the end of the economic tunnel.

However the figure of 67,858 is lower than the drop last June, when dole claims dropped by 83,834. The total number of jobless claiming dole is still over 4.1 million. This does not include another estimated half million people who have run out of dole credits or never had them in the first place.

June is traditionally a good month for the services sector because it is the beginning of the tourist season. But if this seasonal effect were eliminated, the numbers’ experts have said jobless claims would have risen by 31,026 people.  A closer analysis also shows that the gap between workers on permanent and temporary contracts continues to grow. Permanent or open-ended contracts dropped eight percent in June from May, for a 12-month decline of four percent. Temporary contracts rose 2.7 per cent in June, bringing the overall rise for the year so far to 1.6 per cent over the year.

For the economists, this is a poor result for the past 12-month period during which the government's labour reforms should have encouraged long-term jobs. Spain has the highest number of temporary workers in the EU.  The jobless figures are expected to continue to drop until the end of the tourist season in September/October, when the figures will show just how effective the government's labour reforms are.