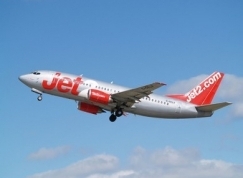 Jet 2.com has announced increased services to and from Spain, with an extra 68,000 seats this summer. The low cost airline based in the north of England says the extra seats respond to demand from passengers, and a rush in bookings following the problems in Egypt.

The Spanish destinations to benefit are Alicante, Ibiza, Málaga, Murcia, Palma and Tenerife. Jet2.com CEO, Philip Meeson said, ‘The enormous demand which we are seeing, both from our British clients in love with Spain and from residents in Spain, be they Spanish or British who want to fly to the UK, has led us to take this decision’.

Manchester, Leeds, Newcastle and Glasgow are the cities which will see most of the new seats.

The changes by Spanish airport are as follows:-

Alicante – More flights to Manchester, with two flights on Fridays and Sundays. The Newcastle route will be increased with flights also on Thursdays and Sundays to take the number of flights to six a week in the summer.

Palma – A new flight to Glasgow on Wednesdays, taking the number of flights on the route to six a week. More flights to

Manchester with two flights on Fridays and Sundays.

Málaga – An increase in the number of flights to Newcastle

Murcia – A new service to Leeds on Sundays. That means there will be eight flights a week on the route in the summer.