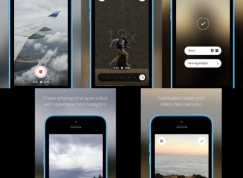 Instagram’s video stabilization technology was built through the acquisition of Luma in August 2013. The original Luma app enabled users to edit the stabilization, brightness, contrast and saturation of videos recorded on mobile devices. Luma participated in the Y Combinator and Stanford StartX startup accelerator programs before becoming Instagram’s first acquisition.

What is time lapse video?

Time lapse is a cinematography technique in which a sequence of frames is taken at set intervals to record changes in a subject happening slowly over time. Once the frames of the video are played at a normal speed, it appears that time is moving faster — also known as lapsing. Some of the popular uses for this form of cinematography include athletic activities, road trips and cityscapes going from daylight to nighttime.

There is a difference between time lapse and hyper lapse. Time lapse images are taken at designated intervals over long periods and is sped up in the final video. Hyper lapse involves moving a camera across a distance as the images are being shot.

“Traditionally, time lapse videos depend on holding your phone or camera still while you film,” said Instagram in a blog post. ”Hyperlapse from Instagram features built-in stabilization technology that lets you create moving, handheld time lapses that result in a cinematic look, quality and feel—a feat that has previously only been possible with expensive equipment.”

This is the second standalone app that Instagram launched since it was acquired by Facebook for $1 billion in 2012. Last month, Instagram launched an ephemeral Snapchat-like photo sharing app called Bolt. The Bolt app is currently only available in Singapore, South Africa and New Zealand for iOS and Android.

Instagram engineers Thomas Dimson and Alex Karpenko pitched the idea for Hyperlapse to employees back in January. The app became so popular internally that it was given the green light by Facebook to launch as a standalone app rather than a tool within the main Instagram app.

Hyperlapse users can record up to a total of 45 minutes per individual video through the app. Once the footage is complete, the app has a slider to control how fast the video will play with options ranging from the standard 1x speed up to a rapid 12x. Videos are saved to the Camera Roll after it is finalized. The Hyperlapse app has an option to share the video on Facebook and Instagram once it is saved.

Hyperlapse does not require a username or password. Users can log in to Hyperlapse using their Instagram credentials if they want to set up one-touch sharing, but it is not required. Unfortunately, you cannot use the app to add the time lapse effect to existing videos. Sound is not recorded while taking the video, but hopefully Instagram will add an option to place background music to the final cut in the future.

Hyperlapse will face competition from Apple’s own Camera app when iOS 8 is released to the public. At the Apple WWDC event in June, the company said that the camera app in iOS 8 will have a built-in time lapse feature. Hyperlapse is distinguishable from the competition by its simplicity though. I downloaded the Hyperlapse app earlier today and was able to share a recorded time lapse video on Facebook within seconds using a few simple taps.

The Hyperlapse app is now available for Apple devices that are on iOS 7.0+. Instagram plans to build an Android version, but there is no launch date yet. According to Wired, Google GOOGL+1.27% will have to make adjustments to the camera and gyroscope APIs to make it possible for Instagram to launch the same app on Android.

Basshunter Exclusive Photos from the shooting of "I Promised Myself" (7)

Beyonce Smoking and Drinking in Her New Video!Watch Here! (1)