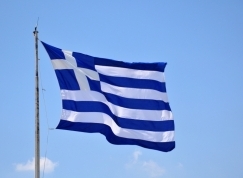 In an unexpected move that shocked Europe, Prime Minister George A. Papandreou announced on Monday that his government would hold a referendum on a new aid package for Greece, putting austerity measures to a popular vote for the first time.

The immediate result was that Europe's already shaky financial markets tumbled in early trading on Tuesday, much to the annoyance of all the other EU countries whose leaders had only last week reached a comprehensive agreement  to shore up the euro zone. This included a 50% debt write-off for Greece as well as strengthening Europe's bailout fund.

Opinion polls in Greece suggest that most people do not support the deal. Mr Papandreou told a  meeting of his governing Socialist party that the Greek people would have the final say on the package, which is designed to reduce Greek debt by about €100 billion through a series of measures including public sector pay cuts, tax rises and falling pensions. Rainer Bruederle, a senior member of Chancellor Angela Merkel's coalition in Germany, said he had been irritated by the referendum announcement. He said other countries were making considerable sacrifices for decades of mismanagement and poor leadership in Greece, adding that the only thing to do now would be to prepare for the Greek state to be insolvent and try to limit the damage to Europe's banking system.

There is also concern that the referendum would be unlikely to take place before January, which would create months of uncertainty for the markets. Konstantinos Michalos, president of the Athens Chamber of Commerce, said "We cannot wait until 15th January, personally I do not think we will ever get there."

Conservative opposition parties have accused Mr Papandreou of acting dangerously and are calling for early elections. A confidence vote is due to take place in the Greek parliament on Friday. Mr Papandreou has 153 deputies in the 300 seat parliament, but has faced increasing dissent within his own party as well as through demonstrations across the country, some of them violent.

A spokesman for the centre-right New Democracy Party, Yiannis Michelakis, indicated how the confidence vote may turn out. He said a referendum was dangerous, and Mr. Papandreou  “has tossed Greece’s future in Europe in the air like a coin”.

Worst of the recession over? (5)

The Spanish Economy grew by 0.2% in the second quarter