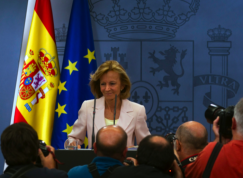 
The bank will start making its purchases today.

The European Central Bank is to buy Spanish and Italian debt to avoid more contagion in the financial crisis. A statement on Monday morning said that it would ‘actively implement’ its public debt purchase program on Monday, in an attempt to avoid a panic reaction on the markets.

The European Financial Facility and Stabilisation fund is considered insufficient for countries of the size of Spain or Italy.

The Eurozone financial leaders discussed the strategy on Sunday night after both Italy and Spain announced new measures and reforms in fiscal and structural policy. Merkel and Sarkozy issued a statement in which they ask for measures to re-establish equilibrium in the affected countries be speeded up. They said they were both satisfied with the measures being taken in Italy and Spain.

In Spain the Government is to approve more measures this month, to ensure the deficit target for the year is met. These include pre-payments to large companies, make part time work contracts more flexible and a deal is to be done with the autonomous regions to control their spending which will be ready in September.

Minister for Tax and the Economy, Elena Salgado, also promised to increase the transparency of public accounts in the regions.