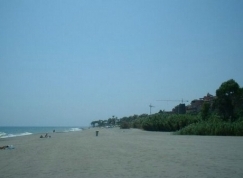 
Estepona town hall has given the green light to new development that will be built on El Cristo beach.

The area, often also referred to as the ‘secret beach of Estepona’, is one of the last undeveloped green zones on the Costa del Sol. Now, the PP-run town hall has passed a motion to allow the construction of a beach club and restaurant covering 1,250 square metres of the beach. There will also be a plaza constructed, which will to cover a further 1,000 square metres.

Councillor Susana Arahuetes has stated that the new developments will not affect current views of the beach in any way, as both developments will be built below the level of the road which runs along the coast line. Former PSOE mayor David Valadez has blasted the decision however, claiming that one of the coast’s last green zones will be destroyed.