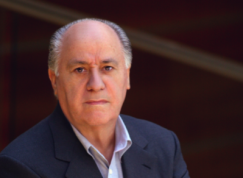 
Spain's multimillionaires increased their collective wealth by 6 per cent last year, despite the deepening crisis.

The greatest business fortune belongs Amancio Ortega of Inditex, the clothing giant best known for the Zara label, who was accompanied on the still-rich list by his first wife Rosalia de Mera. Also present were Santander’s Emilio Botin and the Entrecanales family (Acciona construction and services group), the Del Pino family (Ferrovial), Alicia Koplowitz and her sister Esther Koplowitz (FCC) as well as ACS, and Manuel Jove.

Stocks and shares might have plummeted on the stock exchange but the value of Inditex increased by 13 per cent, making Ortega worth a further €2,731 million.  Nevertheless, Ferrovial’s 25 per cent increase outstripped Inditex’s, improving the Del Pino family’s bank balance by €634 million. It was not all good news, however.  Manuel Jove, who earned €4,000 million from selling the now beleaguered Fadesa real estate company, lost 12 per cent of his wealth through a 5 per cent share in the BBVA bank purchased after the sale.

ACS, whose majority shareholders are the March banking family, los Albertos (Alberto Cortina and Alberto Alcocer) plus Florentino Perez – president of Real Madrid as well as ACS -  suffered a 35 per reduction in wealth. Between them the holdings of Spain’s super-rich are worth €37,700 million.  This is roughly the same government spending cuts aimed at reducing the national budget deficit from 8 to the EU-stipulated 4.4 per cent. But Spain’s greatest business fortunes declined to emulate L’Oreal’s French owner Liliane Bettencourt or the American business magnate American Warren Buffet by offering to pay higher taxes.

They did so indirectly last September after a meeting of the Business Competitiveness Council to which they belong. Most opposition came not from those who had inherited money, but those who had made it, according to a leak reported in Publico newspaper.

New Treasury minister, Cristobal Montoro has already increased income tax on salaries and interest from savings. The cost of combating the crisis should be equally distributed, he said, but it now remains to be seen how far that equality will go.