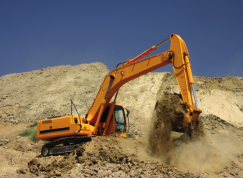 
According to a recent study by the Fundación Colegio Libre de Eméritos Universitarios around a quarter of Spain’s construction companies have closed shop.

“Thereafter, and as a result of the bursting of the ‘housing bubble’, the rate of change in construction has declined more strongly than in the rest of the economy,” says the study. The study also criticised the Ministry of Development for reducing its infrastructure budget by 6.4 billion euros.