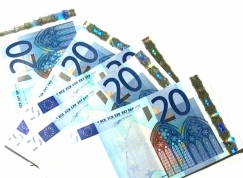 More than 200,000 € worth of fake 500 € notes have been found in the room of a Málaga hotel. As if in a Hollywood film the notes were found behind the air conditioning grill in one of the rooms by a workers in the Tryp Alameda Hotel in the city centre.

The room supervisor noted that the grill had been forced and found the notes behind, then calling the National Police.

The notes have been set to Madrid to confirm they are counterfeit, and an investigation has been opened as to who could have left them there. Police think it could have been part of a fraud attempt.

EspinozaTia 14-09-2011 01:41 I think that to get the mortgage loans from creditors you ought to present a great motivation. However, one time I have got a college loan, because I wanted to buy a house.
0