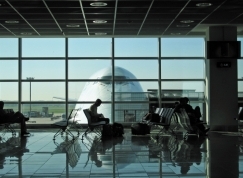 
More than 12 million people used Malaga Airport throughout 2010, 3.8 per cent more than the previous year. This is the first time since the onset of the economic crisis in 2007 that passenger and flight movements have increased, according to the Spanish Airport Authorities, AENA.

As usual, the busiest months were July and August, with peaks of 456 take-offs and landings on August 8, and 57,744 passengers on July 31. Low-cost airlines carried 3.75 million passengers to and from Malaga during 2010, beaten only by Palma de Mallorca and Barcelona, and up 3.8 per cent from last year, Institute for Tourism Studies figures show.

Their growth in the whole of Spain was 5.9 per cent from 2009, while traditional companies saw a 2.1 per cent rise to 25.74 million passengers. The main markets for low-cost airlines are the UK and Germany, with 37.6 and 20.7 per cent of the total number of passengers for Spain respectively. They are followed by Italy and France, with 19.2 and 6.7 per cent, both up from 2009.

The airline with most passengers at Malaga Airport, as predicted by its president Michael O’Leary in 2009, is Ryanair, which carried 2.1 million passengers to and from Malaga, almost double the previous year, and taking the first place from Easyjet, which is now second.

Ryanair currently has 47 connections to several locations in Spain and Europe. AENA also reported that the most popular destination from Malaga Airport is still Gatwick.