Sam Cameron's Marbella Nightlife Blog #10: An interview with the one & only PAUL OAKENFOLD! 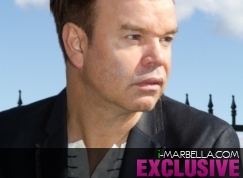 
On this week's Blog I have another interview. BUT this time with one of the biggest House DJ Legends I could possibly think of. It is a honor for me to interview a 3-decade succesful DJ: Mr. Paul Oakenfold!

Just a week before him coming to end an era to the Nightclub I grew up at! Dreamers Marbella.

I'm about to meet one of the pioneers of House Music for me! I remember my 1st time in Ibiza under the age of 16  for my Uncle's wedding (2001 If I'm not wrong) and first thing I saw coming out the airport was a massive billboard of Paul! Just him and his weekly residency! Nothing else on that 15x6 metre billboard!

1. Your first time at Dreamers. And you will be closing an era of 12 years of Big Deejays and Music Culture for Marbella. It's a honor to have you. Are you looking forward to this one?
Of course! I get really excited about all my gigs!

2. Have you been to Marbella or the Costa del Sol before?
Yes - After 3 decades of being on the road I think there are only a small handful of places in Europe I haven't been to!

3. You've been in the business for over 30 years. What would be your message for the amount of young talents battling to get their chance?
Be original, believe in yourself, work very hard and never give up - no matter how many disappointments you have to face along the way.

4. Any new record deals or releases coming soon?
Yes I have a new single coming out in Europe on May 28th called "Surrender" - which was pretty big already in the US where it hit number 3 on the Billboard charts. Then I have an artist album I am putting the finishing touches to - called "Pop Killer" - that will probably be out early in 2013. I'm also working on another track called "Come Together" which is really coming together - coincidently. That will be out in the Summer on Perfecto Fluoro.

5. You've recently been at Coachella and a couple other big festivals. What are your plans for this Summer?
I'm on the road non stop doing say 15 to 20 shows a month. In August I will be taking some time out in Ibiza and doing 3 or 4 shows there. It's still such a magical place and I can't wait to be there - hanging out with mates and generally taking some down time.

Thank you for your time. And I will see you next weekend!
Thanks! Can't wait!!!

Sleek Nightclub is waving Dreamers goodbye, and we're doing it in style! It is expected that the new venue will be bringing an entirely different image to the Club and the Nightclub scene in Marbella and expect to take clubbing here to a whole new level!

"Tune of the Week" had to be Paul's ResuRection Remix! Drives me crazy and I can't wait to hear this pumping on Dreamers Funktion One Soundsystem!

Thank you for reading My Blog this week! Best one so far! But more to come!

Sam Cameron 20-04-2012 19:35 Hi Joanna. Im afraid he won't be coming twice this Summer, but you should try make it! We will be revealing the whole calendar after the show!

Tim. I love his music. But I agree it can be different and heavy sometimes. He has been at the Top 20 for 30 years now so yes he deserves everyones respect! And at the age of almost 50 (next year Paul! :P) he still plays 20 shows a month!