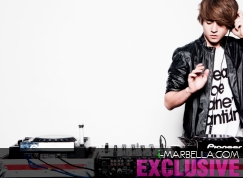 
In the space of just four years, Danny Avila has gone from star-struck observer to one of the most enlightening protégées on the European circuit. How many other teenagers can boast monthly residencies on international radio stations? Or say they’ve shared billing rights with David Guetta, Afrojack, Martin Solveig, Fedde le Grand or the Black Eyed Peas?

Having played across Europe and the Middle East this Spring alongside Fedde le Grand and Martin Solveig, upcoming festival appearances that see him share the mainstage with artists such as David Guetta, an extensive raft of new production ready for release and radio residencies bringing him to the ears of milions, Avila’s star is set for an explosive and earned ascendance towards global consciousness over the next twelve months.

Having met him personally and seen him play at the age of 14 in 2010 at Dreamers, all I can say is he deserves to be where he is, and wish him all the best with his new career!

Let's make him a few questions so you can know a bit more about him!

Q: Where are you from?

I was born in Madrid but when I was 4 years old I moved to Marbella. I lived there for 12 years and all my music culture and career started there. Last year I decided to move to Madrid to continue my career as there were more professional opportunities there for me to grow as a producer and DJ.

Q: What got you into DJing and Producing?

I have been involved in music since I was 4. Electronic music has always been a big passion for me. When I was 12 years old I bought a small controller and thats how all started. All my friends wanted me to DJ at their birthday parties so I earned enough money to buy better equipment. Producing is definitely half of being a DJ. I needed to start producing my own music, so when I was 14 years old I started learning and improving my production skills.

Q: When did you decide this was the career you wanted?

It wasn't like one day I just woke up and thought: "Oh, I'd really like to be a DJ". For me, DJing is sharing my passion for music with other people. I remember when a lot of people asked me… "What do you want to be when you are older?" And my answer was always "I have no idea… but it will definitely be something involved with music!''

Q: Did you have to leave your studies or carry them Full-Time/Part-Time?

For me it's very important to finish all my studies. You never know what's going to happened in the future. But I have a special schedule which allows me to continue with my music career at the same time. When I finish school I want to broaden all my production skills and knowledge and study music as a career!

Q: What equipment/software do you use to produce your music?

I use Logic 9. But I'm also checking out all the Native Instruments products and I just got the Maschine which is amazing to make beats on!

Q: When did you sign your first record deal?

I haven't signed a record deal yet. At the moment I am working hard in the studio on my productions, that's my priority for now.

Q: How would you describe your style, and who can we compare it to?

It's somewhere between  progressive and electro and sometimes techy. I also like to drop some Dubstep tracks in my sets. But I'm totally open-mind and never say no to new styles! I also like to drop acapellas during my sets and play with them using loops and hot cues!!

Q: When will you be releasing your next track/Tracks?

Soon :) As I said before, I am working hard in the studio but I will not release anything I am not 100% happy with it - I'm a bit of a perfectionist :)

Q: Which cities have you played in and which would you say is your favorite?

I've played in different cities like Dubai, London, Moscow, Abu-Dhabi, Ibiza, Berlin… probably my favorite one so far is London. I played before Fedde Le Grand at the Ministry Of Sound. The crowd was SO into it!! They were going nuts with every single track I played… If you want to see what happened watch the video below! :)

Q: What are you doing at the moment and what are your plans for the rest of the year?

I have some really big shows lined up this year…some of them are still to be confirmed. I'm also very excited about releasing the new tracks. Also I'm going to play in Ibiza this summer season at Blue Marlin and also a couple of other venues, and I'm sure that's going to be amazing! So I can't wait for what the rest of 2012 will bring!!!

Q: Where do you see yourself in 5 years?

My life has changed 360º in 1 year… so i have no idea at all what I'll be doing in 5 years. My objective now is to continue learning and doing what I want to do, which is music.

Q: Who would you say is your musical idol? Role Model?

I have a lot of influences. Fedde Le Grand was the first Big DJ that I saw when I started DJing. I was 14 years old when I first saw that kind of performance and I was so impressed, it really opened my eyes as to what was possible when you know what you're doing in the DJ booth, and you know your music inside out. He has been my role model because of his professionalism and his DJ/production skills. He is without a doubt one of the best artists in this industry. But I like a lot of other DJs like Sebastian Ingrosso, Hardwell, Chuckie, Axwell and many more...

Q: When will you next be playing in Marbella?

I don't have any confirmed dates yet, but I drive down to Marbella as much as possible to see my friends and family, and spend some time with them.

Thank you Danny! Definetely see you playin' down here soon!

It's time for "Tune of the Week" and It had to be one of our favourites! "Internet Friends" by Knife Party! Enjoy!

Have a good weekend everybody!

Madonna to Rap on Next Album (1)

David Guetta at Dreamers in Marbella (1)