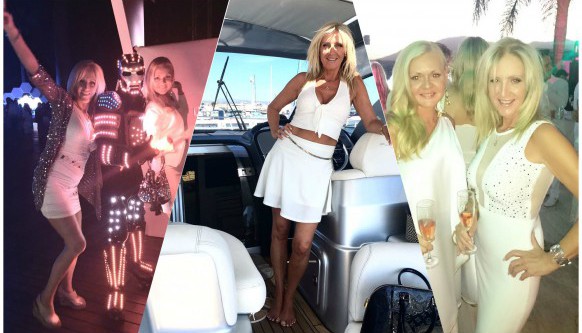 In my last blog, I started to tell you how I went a little crazy after my kids all left to get their own lives and I found myself ‘SINGLE IN MARBS’.

Well not crazy as such but I partied like crazy as you do when left in Marbella on your own. Hahaha.

I had literally gone back to my 20’s, you know, Pre-marriage and pre-kids.  I was out almost every night; I was living la Vida Loca. I had found some great new friends who had the same agenda as me and which was “party, party, party”.

I guess all the stories that I accumulated during that time, were really what inspired me to start writing ‘Single in Marbs.’

If like me, you have brought up your kids and they are all grown up now, you will know exactly what I am talking about when I tell you that after 20 years of looking after other people you can suddenly really get used to being selfish for a change.

It’s really so weird having a big house to yourself, no man to argue with, hahaha and no kids screaming at each other. As much as all that used to drive me insane, being home alone, the silence was deafening.

So what do you do in that situation? Go out of course. Hahaha, That empty house was literally empty as I was never home.

My new single friends were great, they had the same energy as me and wanted to be out all the time. I was lucky to have found them as I guess being single can be a very lonely place if you don’t have all those important friends.

Starting to look at new men was weird. Omg, I remember it was so strange at first.  I mean after six years of being with someone and being faithful all that time, thinking about going with another man was totally weird and to be honest really quite scary. I needed to get back on the horse, as it were.

Although I was still looking ok, I needed to regain some confidence, which had been bashed by my X.

Being single is a whole new world and you need a whole new wardrobe to go with that. I had to vamp it up a bit, any excuse to go shopping. Lol

It’s a funny place to be, society says that now you have a void in your life that you need to fill.

A newly fledged member of the single world, you don’t really know where you fit in as you certainly don’t fit in in couples land anymore.

I was now a singleton and suddenly I felt a little weird around couples. They seemed to be rather strangely distant like I had contracted some kind of life-threatening, deadly disease.

I confided in a male friend of mine, asking him why he thought that the couples I knew were a little weird around me.

He laughed and said, “Of course they don’t want you around babe, you are hot!!” He laughed out loud.  They feel threatened to have you around in case you steal their men.”

“What…. are you serious?” I asked in astonishment. “Yeah babe, think about it, you are now a nightmare for them.”

“Oh god, I really don’t want to be like that, I don’t want any of their men? Lol”

“Yes babe, I know but its normal, if you were in a relationship you wouldn’t want half of them hanging around, they are all hot.” Hahaha, we both laughed out loud. Yes, they were indeed.

Well, I guess he was right, but I instinctively didn’t really want to be around couples anymore.

I had new single friends who totally got me, the couples hated them too. Hahaha

We were all glamourous girls and we were embarking on a new adventure all being ‘Single In Marbs’.

There were plenty of men in Marbella and we were all in the same boat, kind of hoping for the man of our dreams to just show up. I have always tried to be an optimist. Lol

It didn’t really take long before I realized that life was not going to be as easy as that. I got involved with a man I shouldn’t of. (That old story) Yep, Marbella is full of that kind of guy.

At the time La Sala was buzzing and all the locals went there. It was like heaven for us. Every week there would be new men arriving in Marbella for their weekend of madness.

I was very standoffish with them and the hookers were never too far away and ready to pounce on their prey.

As much as I believe that, 'what’s meant to be, will be,' if you are looking for a nice guy in Marbella, it’s probably not going to happen.

So many men and yet so little potential. The reason I say that is because they all come to Marbella to be ‘weekend millionaires’. Throwing their money around like paper doing the craziest things. Spraying champagne, partying all day and all night, doing tons of crazy shit.

They are not looking to meet their future wife but I wasn’t looking for that either, I was just having the best time with my friends. We were all in our little bubble getting as much fun out of Marbella as was humanly possible.

Marbella has to be one of the best places in the world to let go and be crazy. The people watching on the Port at Puerto Banus is always top class. No better place to be sometimes than sitting in Sinatra bar and watching all the crazy people.

Karina Miller is a blogger, writer and author of the books ‘SINGLE IN MARBS’ and ‘MARBELLA GIRLS.’ based in Marbella, Spain. Both books are available right now on Amazon and will shortly be available in BOOKWORLD Puerto Banus, Marbella.