i-Marbella Luxury & Art #1: 10 Things You Need to Know About Investing in Art 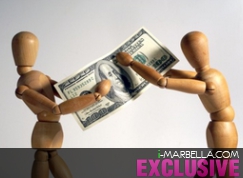 i-Marbella presents a new section: Luxury & Art in collaboration with Dellart.com and the first article talks about investing in art.

10 Things You Need to Know About Investing in Art by

Clare McAndrew speaking at the ArtFi conference in Berlin

Berlin played host to the third edition of ArtFi, the Fine Art and Finance Conference, on Wednesday, welcoming influential panelists and art world insiders to the Tagespiegel newspaper headquarters for a day of high-tempo exchange on the latest trends and developments in the art market. Coinciding with Berlin Art Week, the conference’s focus on art and money turned more than a few heads in the German capital, which is legendary for its extremely low concentration of collectors. But speakers such as Art Economics’ Clare McAndrew, the Armory Show’s Noah Horowitz, Art Stage Singapore’s Lorenzo Rudolf, and the Fine Art Fund’s Philip Hoffman, were greeted by a hall packed with international individuals hungry to get the inside scoop on the nexus of money and art. For those that couldn’t attend, artnet News boiled the day down to 10 must-know bits of intel for investing in art.

1. Key players are bullish on art market performance in 2014.
While Clare McAndrew was hesitant to make any specific projections on the market in 2014 in her opening remarks for the conference, she expressed confidence that this year would see continued growth across the art market, over the €47.42 billion in market value for 2013 (“TEFAF Art Market Report Says 2013 Best Year on Record Since 2007, With Market Outlook Bullish“). That likely means that we’ll see the market eclipse its pre-recession level of €48.07 billion from 2007 this year. McAndrew noted that some sectors of the auction market are up 20 percent over 2013, according to half-year reports, due to a strong spring auction season. Nevertheless, she cautioned that much of the market’s worth and relative performance won’t be decided until the fall sales wrap up in December.

2. Business is best in New York, but that doesn’t mean you have to move there.
McAndrew also noted that 80 percent of sales over $10 million are occurring in New York, a city which continues to dominate the global art market, across the upper-end of the price spectrum. A&F Markets’ Pierre Naquin explained in a later break-out session that much of this market dominance could be ascribed to favorable taxation terms in the United States in comparison to other major art markets. Naquin and McAndrew both agreed that the US remains one of if not the art market’s most business-friendly locales.  Thus, a not-insignificant portion of what’s calculated as the US market is in fact art that is imported to the country for sale. Naquin explained that due to art’s relative portability compared to other hard assets, collectors and dealers are increasingly exploring the most favorable sales conditions internationally—something that has accounted for a sizable downturn in the European art market’s growth—especially due to the Artist Resale Right (ARR) (“UK Art Dealers Are Dodging Artist Resale Rights“). McAndrew even referenced a sale in which a client determined it would be cheaper to crate and ship a work to the US rather than sell it in Europe, due to the ARR.

3. China remains a solid medium-term bet.
The Chinese market may have dropped 30 percent in 2012, but for those who take a slightly longer view, there continues to be much to win. The Chinese upper-middle class is expected to hit 55 percent for all urban populations by 2022, something which McAndrew cited as a foundation on which solid, long-term growth for the country’s art sector could be built. Art fund manager and panelist Serge Tiroche has bet big on such projections for emerging economies with Art Vantage PCC. The fund currently has managed assets in the eight-figure range and is based solely on a privately held collection of contemporary art from emerging markets.

4. You don’t have to have billions to get into the game, but it helps.
Throughout the conference, panelists continued to reference the fact that it’s the extreme upper-end of the market that is seeing the highest levels of growth. Armory Show director Noah Horowitz noted the increasing death of mid-size galleries (“Are Mid-Size Galleries Disappearing, And Who’s To Blame?“). And all four participants on this reporter’s panel “Art as a Financial Asset”—Philip Hoffman, Shirin Kranz, Naquin, and Tiroche—more or less agreed that high-end contemporary is the place to put your money right now for the highest return when investing in art. But, McAndrew also noted that only 0.5 percent of the market is located above $1 million, so there’s plenty of the room for relatively less well-heeled players to get into the game.

5. Interest in art funds continues to grow.
Fine Art Fund Group founder Philip Hoffman reported that interest in the securitized side of the art investment field continues to expand at a rapid pace. The group is in the process of closing out its latest, $200 million fund. That will bring their total managed assets upwards of $500 million. He reported that they are currently purchasing about $4 million in art per week and selling at favorable returns, with only approximately two percent of sales resulting in a loss. Perhaps surprisingly, Hoffman claimed that the greatest of those losses has been with the ever-buzzy Chinese contemporary market.

6. Put a damper on your passion for art when making purchases.
Despite Hoffman’s success with the Fine Art Fund itself, he shared a cautionary tale from the art advisory side of the group’s business: a collector who had recently spent €12 million on a group of artworks that, according to Hoffman’s experts’ calculus are worth no more than €7 million.  When passion for an artwork or artist gets in the way of strategic analysis of acceptable purchase price ranges, it can completely tip the scale from a moderate return on investment to a devastating loss.

7. But, don’t think that passionate collecting and achieving moderate returns are mutually exclusive.
That said, private collectors can afford to spend slightly more on single works of art than an art fund might. So, with a bit of discipline, the right advice, and if all else fails, a trusty companion to rip the bidding paddle out of your hand, you could find yourself a member of what collector Sylvain Lévy said is a lucky sub-set of collectors who both get to enrich their lives with fantastic artworks and make some money in the process. Just don’t think you’ll end up the most popular collector in town. Berlin gallerist Johann König took Lévy to task when the panel was opened up to questions from the audience, regarding the collector’s practice of selling 15 percent of his and his wife’s collection every year.

8. Proliferation of art lending set to add further liquidity to European market.
Art lending has become increasingly commonplace in the US thanks to less regulation on how the collateralized piece of art is held. Would-be European art loan providers have to take physical possession of the artworks being lent against, which provides increased challenges and transaction costs. But that hasn’t stopped Berlin’s PrivatBank from being Germany’s first to enter the field. The bank’s Shirin Kranz, formerly of Phillips, said that the recently-opened sector allows galleries, collectors, and even artists to pull some liquidity out of their holdings without selling the works, whether as a bridge loan ahead of a sale or on a more long-term credit line basis. Considering the slump in the European market, it’s liquidity that could help bolster the market’s future.

9. Art exchanges and derivatized art investment products are coming but remain a distant prospect.
But what about taking art as an asset class to the next level? Can funds or other financial services firms create compelling collateralized investment products out of art? According to Pierre Naquin, yes, but we’re in the very early days. Naquin started the Art Exchange in 2011, which allowed investors to purchase and trade shares of various artworks. Naquin says the exchange never really took off. But he was optimistic about the ways in which art analytics indices could be derivatized in the medium-term as banks and private investors alike become increasingly comfortable with art as a part of their portfolios.

10. Greater transparency in the art world is going to benefit everyone.
It’s no secret that the art world is incredibly opaque—particularly on the primary market. In ArtFi’s final panel, the Wall Street Journal‘s Mary Lane referenced a recent article in which she unpacked the rise of millennial artists like Hugh Scott-Douglas, Parker Ito, and David Ostrowski and just how thick a stone wall was placed in front of her when attempting to speak to some of the artists’ dealers about their market values. But greater transparency in the art market is urgently needed. “Transparency and knowledge is only going to benefit everyone,” artnet’s own Cornell DeWitt quipped later in the panel. “It’s either us in the art media or it’s going to be the Feds.”