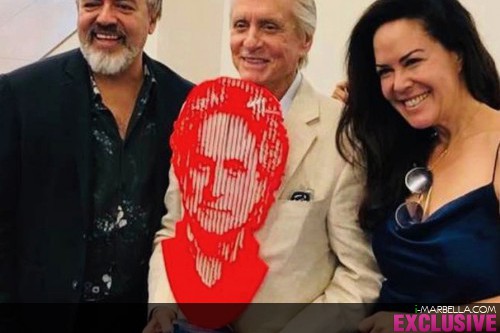 
On June 18, 2019, in the conference center Grimaldi Forum Monaco in France. Ursula Salvador met Hollywood star Michael Douglas who was invited to receive an honorary art portrait made by Marcos Marin who is the official artist of Prince Albert from Monaco.

Marcos Marin who is the main painter for Prince Albert of Monaco has been his artist for decades. Ursula Salvador is his agent gallerist and they both took a trip to Monaco for 50th Film Festival which is celebrated every year last fifty years.

This time honouring Michael Douglas, an American actor best known for his roles on TV's 'Streets of San Francisco' and in the films 'Wall Street,' 'Fatal Attraction' and 'Wonder Boys and have recently bought a property in the island of Majorca.

The festival under the commission of Marcos Marin honoured the actor with a piece of art of his portrait. Signed after by him and Marcos Marin.

The event that is part of the Prince Albert Foundation took place in the Grimaldi Forum. Followed by a reception at the Ball de Etoiles at the Sporting Club of Monaco under the stars. with Gloria Gaynor performing live for the guest.

Ursula Salvador is an international Art Dealer and Agent Gallerist born in Spain who lived for 23 years in Miami and then 4 years in Paris. Ursula studied art history at the Sorbonne in Paris and has worked and collaborated ever since with galleries and art fairs. She has a lot of international background in arts having lived in many different places like Lebanon and Greece. She's currently based in Miami.

Marcos Marin is a master in Optical Opt Art. He has done many shows all over the world. Pierre Cardin was his first patron and supported to Berlusconi his first client decades ago. So having had the honour to be in Prince Albert of Monaco private collection and as well as many of Marcos Marin sculptures are all over Monaco and The South of France.

Grace Princess sculpture will be in Art Marbella this year. Supported by Princess Grace Foundation also in Monaco and NY.

So first time in Marbella. Uniting ties, uniting actors cinema with art. With the arts.

Art Marbella 2019 on its fifth edition will take place on the 30th July until 3rd August 2019 Marbella, Costa del Sol, Marbella. With 45 galleries from around the world with masters and contemporary upcoming best artists.

Alejandro Zaia is the director and Ursula Salvador part of the committee and founders.

Among the most known artist that the attendants will see.

Billy Zane, an actor, and artist from Hollywood (Titanic) will be exposing 2 pieces in Art Marbella with USC Gallery Miami.

Alexandre Zuleta, a famous artist from Guatemala with his geometrics and mastery in surrealism with canvas who is fighting and protecting environmental issues.

Aixa Portero, one of the most upcoming artists in Spain and internationally recognized. Marcos Marin the official artist of Prince Alert Of Monaco.

From Cascais, Portugal the best in Portugal named Krystel Ann. Phillipe Pasqua, also one of the best artist out there with shows all over the museums and recently one in Monaco contemporary museum in front of the Palace. Gloria Porcella from Miami. One of the best contemporary gallerist. The Miami Pop coming trend artists will be showing. Galería Imaginaria from Buenos Aires with top artists from Latin America.

In a resume, there will be the best galleries from Spain, Europe, the Middle East, Iran included as a guest country and so many surprises.

The First Major International Modern & Contemporary Art Fair in the Costa del Sol, Spain. July 30 to August 3rd 2019 at Palacio de Congresos de Marbella. The fair will be from 6 pm to 10 pm each day.

More info you can find here: