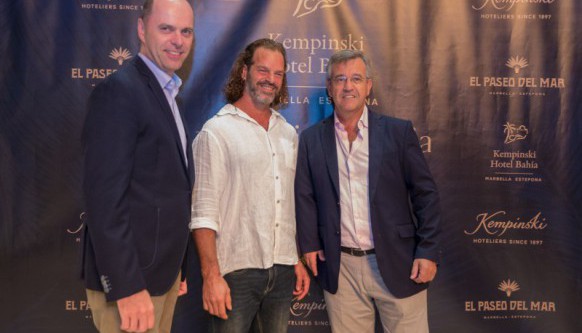 
Described as impactful, delicate and unique, the new exhibition of sculptures forged by Nimrod Messeg at the Kempinski Hotel Bahia was showed off at the lobby of Spain’s Marbella hotel during October’s 11th of 2018 captivating the sight of all the attendants.

The exhibition was officially opened by the mayor of Estepona, José María García Urbano, General Manager of the Kempinski Hotel Bahía Axel Bethke and the Sales and Marketing Manager Francisco Sa Teixeira, welcoming art enthusiasts from all over Costa del Sol and other regions of Spain as well as the hotel guests who participated in the event.

This exhibition forms part of the Kempinski Hotel Bahía’s Arts Series and will be open to the public eye until November 21st welcoming all art lovers and enthusiasts to come and enjoy the sculptures carefully designed and crafted in iron steel located in the lobby and in the gallery at the right of the entrance of the hotel.

For its part, Messeg, the artist, stated to be “delighted with exhibiting in such a stunning location and receiving the reaction of the public to his works”. In addition, he said that “it isn’t usual for me to exhibit here, I normally hold most exhibitions in major art centers such as Paris and London, but I am so happy to be here, speaking to people and seeing how they relate to my pieces.”

Among the 15 sculptures on display, there are 14 metal torsos celebrating the beauty of the female form and one striking sculpture of a bull. In this exhibition visitors can admire two of the artists’ favorite pieces, the impressive El Vuelo, which is in the center of the lobby and his latest piece Alya, which has never been exhibited before, all of them worked with extreme care and with innovative forging techniques that allow him to give more realistic shape to the metal.

Nimrod Messeg was born in Israel and is the son of the famous Israeli painter Aharon Messeg and the poet Sabina Messeg. He began sculpting from an early age and has developed his own artisan method of sculpting with iron. He uses traditional forging techniques to create textures, shapes, and effects which transform the metal into something beautiful, light and soft.

Get to know more about his art at www.nimrodmesseg.com.

Based in Estepona – Marbella, Spain, is a breathtaking luxury frontline beach resort with 145 rooms (including 17 suites) overlooking the Mediterranean Sea and Hotel with subtropical gardens and pools and also features a meeting & events center, trendy culinary concepts, and an exclusive Kempinski Spa.

Make sure to take a look at https://www.kempinski.com/en/marbella/hotel-bahia/