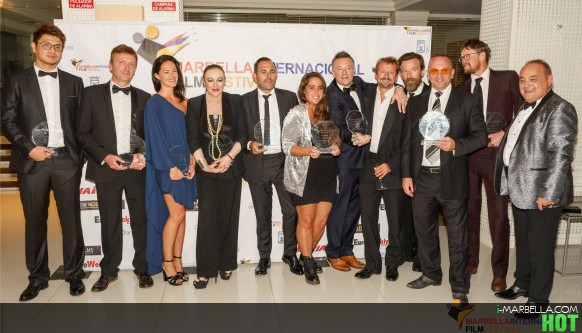 
The awards ceremony for the 14th edition of Marbella International Film Festival was held on October 6th, 2019, at H10 Andalucía Plaza Hotel, resulting in one of the most prestigious and glamorous events in Marbella, Spain, attended by celebrities and high-profile film industry professionals, making the night an outstanding success

The glamorous ceremony was held at the H10 Andalucía Plaza Hotel and marked the end of four intensive days of workshops, premieres and seminars in favor of the cinematic culture in Marbella.

This way, Trick or Treat took an emotional Best Feature Film Award at the Marbella International Film Festival while the city was once again the focus of the film world like directors, producers and actors from countries including China, Paraguay, and the US showcased their projects.

In this case, Trick or Treat, directed by Edward Boase, and staring brothers Craig and Dean Lennox Kelly, not only won Best Feature but also Best Actress thanks to the performance of Frances Barber and Best Supporting Actor, which was given to Kris Marshall.

Besides, this was a night of conflicted emotions for the stars, a during an emotional acceptance speech, Craig and Dean revealed that they had learned of their father’s death just moments before attending the screening.

Here is the list with all the winners at MIFF 2019:

MIFF is the perfect event for meeting & networking to launch your film, career or just indulge your interest in the film. Perfect for corporate events, we offer several packages to get right in amongst the action with a red carpet premiere every night, followed by an after-party and of course ending with the famous Gala dinner on Sunday.