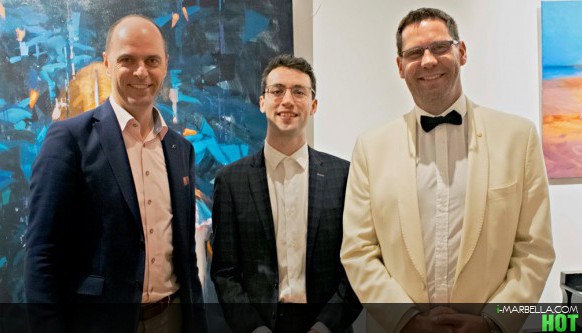 
Kempinski Hotel Bahia of Marbella, Spain presented the talented international soloist and chamber pianist Billy O’Brien who received a standing ovation from the more than 70 attendants on the 24th of January, 2018

Kempinski Hotel Bahia celebrated the successful start of its 2019 Art Series welcoming the talented international soloist and chamber pianist Billy O'Brien, who delighted the evening with his performance on January 24th.

Billy O'Brien enjoys a successful career as a soloist and chamber musician. He made his debut in the great show of the RTÉ Concert Orchestra in 2016 playing Rhapsody in Blue by Gershwin.

Other recent appearances of great repercussion have been the Piano Concerto Ravel G major in the National Concert Hall of Dublin and the Triple Concert of Beethoven in the National Opera House with Wexford Sinfonia. He has had the opportunity to delight audiences at the New Ross Piano Festival, at the National Gallery in Dublin and was also invited to perform at the Embassy of Ireland in Paris as part of his celebrations in Bloomsday.

He has twice represented Ireland at the Dublin International Piano Competition. Billy also completed a bachelor's degree in piano performance at the Royal Irish Academy of Music and graduated with first-class honors. He spent two years studying with the renowned Russian pedagogue Rena Shereshevskaya at the Rueil Malmaison Conservatory in Paris, where he received a Perfection Award, and the Excellence Award as the best piano student. And, He is in addition currently coursing doctoral studies at the RIAM.

Axel Bethke, General Manager, stated: "As part of Kempinski Hotel Bahia's dedication to art and culture, and in conjunction with Project Music, it was an honor to welcome such a prestigious artist as Billy O'Brien to our hotel It has been an incredible night.”

The event has been organized jointly with Project Music, whose mission is to offer high-level events, combining music, art, dance and drama from the world of visual and performing arts. Between Spain and Ireland, Project Music brings talents from around the world to unique places and spaces. Shane O'Shea, its founder, declared "Our goal is to offer quality events that are attractive to everyone."

And learn more about upcoming Kempinski Arts Series 2019 events, you should visit https://www.kempinski.com/en/marbella/hotel-bahia/local-information/events

Nestled in Estepona – Marbella, Spain, and celebrating its 20  anniversary in 2019 is a breathtaking luxury frontline beach resort with 145 rooms (including 17 suites) overlooking the Mediterranean Sea and Hotel with subtropical gardens and pools, and also features a meeting & events center, trendy culinary concepts, and an exclusive Kempinski Spa.