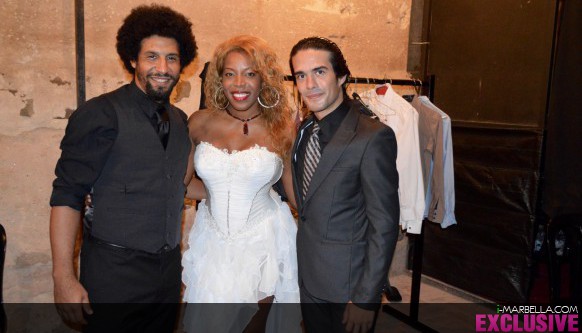 It was a cultural event to celebrate the USA, Spain, and Cuba.

The show featured the performances of the true masters: Juan de Juan Flamenco from Spain, Jason Samuels Smith from New York, and Yanela Brooks from Cuba as well as many other singers and musicians.

i-Marbella had a chance to go backstage as well as enjoy the performances among the audience.

The performers mostly improvised as the rehearsals were done backstage, and it was perfect! The event cost just 15 Euro, but can well be compared with Russian ballet and Italian opera.

Samuels Smith was born to professional performing arts parents Sue Samuels and JoJo Smith. He began his professional performing career at an early age through Frank Hatchett's Professional Children's Program at the Broadway Dance Center in New York City. At a young age he had appearances on the television show Sesame Street and at the age of 15 was understudy to the leading role in the Tony Award winning Broadway show Bring in 'Da Noise, Bring in 'Da Funk.

He won both an Emmy and American Choreography Award for Outstanding Choreography for the Opening number of the 2003 Jerry Lewis/MDA Telethon in a tribute to the late Gregory Hines.

The Pianist, Composer, Arranger, and Singer Yanela Brooks was born into a family of musicians. Yanela started her piano career at the Samuel Manuel's Music Conservatory when at the age of 7. In 2012, the Cuban diva participated in the Spanish version of The Voice, La Voz, where her performance of Tina Turner's Proud Mary became one of the most talked about in Europe. On December 5, 2012, Yanela was chosen to sing Spain's national anthem with lyrics by Jon Juaristi in front of more than 30,000 people on Plaza de Colon in Madrid. Her second DVD recorded at Puente Romano Beach Resort and Spa is the official tribute from Marbella to Michael Jackson, in which Yanela delights us with classical soul, disco, rock, and Latin music.

For an exclusive interview with Yanela Brooks, click HERE!

Juan de Juan was born in 1979 in Seville, the land of great flamenco artists. He studied at the Real Conservatorio de Sevilla and later on with maestros Ramón Barrull, Manolo Marín, Juana Amaya, Juan Ramírez, Ciro, Manolete and Antonio Canales.

He is a fundamental member of the Antonio Canales Flamenco Ballet, the company in which he gained notoriety by performing his first roles.

In February 2002, he went with his group to Alicante with a new show, Anda-Luz, a work which has been presented in 50 Spanish cities.

Despite his youth, in 2003 he received awards for professional achievement at the flamenco festivals Potaje Gitano de Utrera, and the Gazpacho Andaluz de Morón de la Frontera.

In 2004, he created his own company on a grand scale called the Ballet Flamenco Juan de Juan, and the world debut took place at the Tenerife Auditorium on April 24th and 25th, later going to Madrid for one month at the Teatro Alcázar with the choreography Torero that was nominated for an Emmy in 1995.