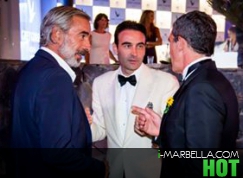 A suit, of pure blue and gold and worth 32,000 EUR, was donated to the Marbella Gala hosted by Antonio Banderas himself.

The Starlite Gala 2015 held in Marbella this year had a special touch to it: matador Enrique Ponce that he was wearing at the La Monumental de Barcelona was donated to the organisation led by Spanish actor Antonio Banderas.

Enrique Ponce made his first public appearance on August 10, 1986, in the Plaza De Toros in Baeza (Jaén).

He performed for 10 years and at over 100 corridas. Ponce is the first torero in history to fight more than 2,000 corridas. He passed this mark in Ronda on September 4, 2010.

The auction for the suit, made of pure blue and gold, exceeded 32,000 EUR.

During the evening, Enrique Ponce presented an award to Miguel Aleman, grandson of the former President of Mexico, Miguel Aleman Valdes, in recognition of his altruistic work as Head of the Foundation.