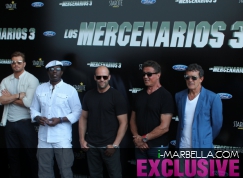 There was a press conference today at the Auditorium of Marbella, part of the Starlite Festival 2014. Hollywood stars like Sylvester Stallone, Wesley Snipes, Jason Statham, Antonio Banderas, Kellan Lutz and producer Avi Lerner came to meet the press in Marbella to promote their new movie The Expendables 3. They are staying in the Los Monteros hotel.

More photos about the press conference soon on i-Marbella.com!

“The Expendables 3” Premier with Hollywood Stars in Marbella

“The Expendables 3” Premier with Hollywood Stars in Marbella

Star Parade at the Premier of "The Expendables 3" in Marbella