Melanie Griffith and Antonio Banderas Divorcing After 18 Years of Marriage 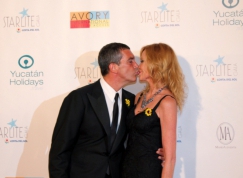 
Actress Melanie Griffith filed for divorce on Friday from the Spanish actor Antonio Banderas after being married for 18 years, citing irreconcilable differences, according a petition filed in Los Angeles Superior Court.

Melanie Griffith and Antonio Banderas have released the following statement regarding their split:

"We have thoughtfully and consensually decided to finalize our almost twenty years marriage in a loving and friendly manner honoring and respecting each other, our family and friends and the beautiful time we have spent together - Melanie & Antonio"

This is definitely an end of an era. Griffith (56) and Banderas (53) married in 1996 after filming the comedy Two Much and they also have a 17-year-old daughter, Stella Banderas. Melanie has requested physical custody of Stella, who turns 18 in September, but joint legal custody, with Antonio allowed visitation.

It will be Griffith’s fourth divorce. Previously she was twice married to Miami Vice star Don Johnson and Scarface Steve Bauer. It will be Banderas' second divorce after separating with his first wife Ana Leza in May 1995.