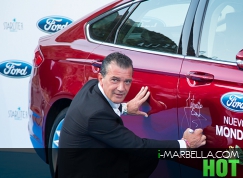 Today, 10 August, is the birthday of the Hollywood star Antonio Banderas, who is originally from Malaga! The Zorro actor turns 54 today!

José Antonio Domínguez Banderas (born August 10, 1960), better known as Antonio Banderas, was born on August 10, 1960, in Málaga, Spain. He began his acting career with a series of films by director Pedro Almodóvar and then appeared in high-profile Hollywood movies, especially in the 1990s, including Assassins, Evita, Interview with the Vampire, Philadelphia, Desperado, The Mask of Zorro and Spy Kids. Banderas is also a voice artist, portraying the voice of Puss in Boots in the Shrek sequels and Puss in Boots as well as the bee in the US Nasonex commercials.

Actor José Antonio Domínguez Banderas was born on August 10, 1960, in Málaga, Spain. Banderas studied drama, eventually moving to Madrid where he performed in plays including Historia de los Tarantos and La hija del aire. There, he met Pedro Almoóvar who gave him a small part in the film Laberinto de pasiones (1982), and from then on he worked exclusively with Almodóvar in such films as Matador (1985) and La ley del deseo (1986).

His first American movie role was in The Mambo Kings (1992), and still speaking no English, he was forced to learn his lines phonetically. To his credit, his performance as a struggling musician was critically praised.

Early in the 1990s, largely due to the international popularity of Almodóvar's films, he began a film career in Hollywood. His real breakthrough to the mainstream American audience came with starring in Philadelphia (1993). Banderas played the gay lover of a lawyer with AIDS, played by Tom Hanks, with a sensitivity that earned him much kudos. His star was shining brightly and the following year he won a role in Interview with the Vampire: The Vampire Chronicles (1994) with Brad Pitt and Tom Cruise. His work as a star standing on equal ground with other A-listers signified that Banderas had truly made the grade in Hollywood.

Banderas' next big movie, Evita (1996) opposite Madonna, found the Spanish actor in a role singing and dancing. The following year, Banderas starred in The Mask of Zorro (1998), with Catherine Zeta-Jones and Anthony Hopkins. Along with his work in front of the camera, Banderas has found success by using only his deep, distinctive voice. He won new fans as Puss in Boots in the popular animated film Shrek 2 (2004), which was folowed by the spin-off film Puss in Boots (2011), featuring popular actors Salma Hayek and Zach Galifianakis.

He met actress Melanie Griffith on the set of Two Much (1996). After a whirlwind romance and his divorce from wife Ana Leza, the couple married in May 1996. Banderas and Griffith have a daughter, Stella (b. 1996). After 18 years of marriage, in 2014, the couple announced they were divorcing.