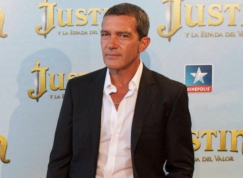 
Antonio Banderas visited the Caminito del Rey (King's walkway) in El Chorro at the weekend to see how works were progressing.

The group walked along the finished parts of the pathway, which clings to the face of the Desfiladero de los Gaitanes gorge 100 metres above the Guadalhorce river between Alora, Ardales, and Antequera.

The original walkway, which gained its name after a visit from King Alfonso XIII in 1921 on his way to an opening ceremony for the Conde del Guadalhorce dam, had been closed to the public in recent years after a number of fatal accidents.

Work to make the walkway safe for use, and allow it to regain its rightful place as a European attraction for nature and sports enthusiasts, began in March with a climber placing the first stone. Málaga company Sando has been responsible for the project, with a €3 million budget, and expects the pathway to be complete in January or February.

The exact date the Camino del Rey will officially re-open depends on the Royal agenda as Elias Bendodo has personally invited King Felipe VI to come and inaugurate the walkway.

Bendodo told the King the story of its connection to his great-grandfather Alfonso XIII and showed him old videos of the site, which he reportedly found very interesting.