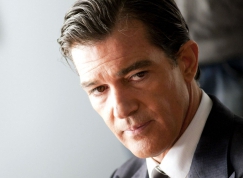 
Antonio Banderas will be picking up an honorary Goya Award to recognise his stellar career.

The award – which will be presented in February at the Goya film gala in Madrid, Spain's main national annual film award ceremony – is to celebrate the risks and commitment of his transatlantic career.

The academy's board of directors unanimously voted to award him for having developed versatility as an actor, shown his own point of view as a director and immersed himself in the role of producer to support national values.

After launching his career with iconic roles in Pedro Almodovar's earlier works like Tie Me Up, Tie Me Down, and Matador, the 54-year-old actor was soon snatched up by Hollywood.

The Malaga-born film star is currently filming Altamira, alongside British actor Rupert Everett, and is soon to appear as Pablo Picasso, with Gwyneth Paltrow, in 33 Days.