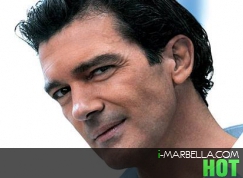 
Antonio Banderas received the Grand Honorary Award at the Sitges Film Festival, the number one fantasy film festival in the world.

The actor from Malaga received the Grand Honorary Award at the Fantasy Film Festival and introduced Autómata directed by Gabe Ibáñez.

At the Film Festival, Antonio Banderas was friendly as usual, waving and signing autographs for his fans who were awaiting for Banderas's arrival at Auditori.

The actor not only received the Grand Honorary Award of the International Fantasy Film Festival, but also was able to present Autómata, a film in which he portrays a protagonist.

Autómata, a Spanish film directed by Gabe Ibáñez, was screened in the main category, in which Tusk, by Kevin Smith, was also shown. Kevin Smith won the Best Picture Award for Red State in 2011.

The Sitges Film Festival has screened the latest productions by such established directors as David Cronenberg (Map to the Stars), Jean-Luc Godard (Adieu au langage), Kim Ki-duk (One on One), and Takashi Miike (The Mole Song: Undercover Agent Reiji).

A tribute to a German producer and writer Roland Emmerich as well as Paul Helman, in charge of special effects in films by Steven Spielberg and George Lucas, was also paid.