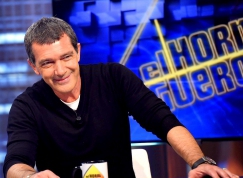 El Hormiguero (The Anthill) is a Spanish television programme with a live audience focusing on comedy, science, and politics running since September 2006. It is hosted and produced by screenwriter Pablo Motos.

The 54-year-old actor split from Melanie Griffith, 57, last June, ending their 18 years of marriage, which was one of the main topics for discussion. Banderas admitted to having a tough year in terms of personal life.

Despite the relationship issues, Banderas said he "will always love" Melanie. Griffith is now featured in Banderas's latest movie, Automata.