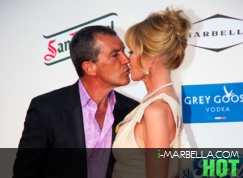 Antonio Banderas celebrated the fourth edition of Starlite Gala with his wife Melanie Griffith and many friends who accompanied the actor in the night of the year.

The Starlite Gala returns with Eva Longoria and Antonio Banderas